The Valentine’s Day Bandit : 44 Years of Spreading Love - Lisa-Marie's Made in Maine
Skip to content 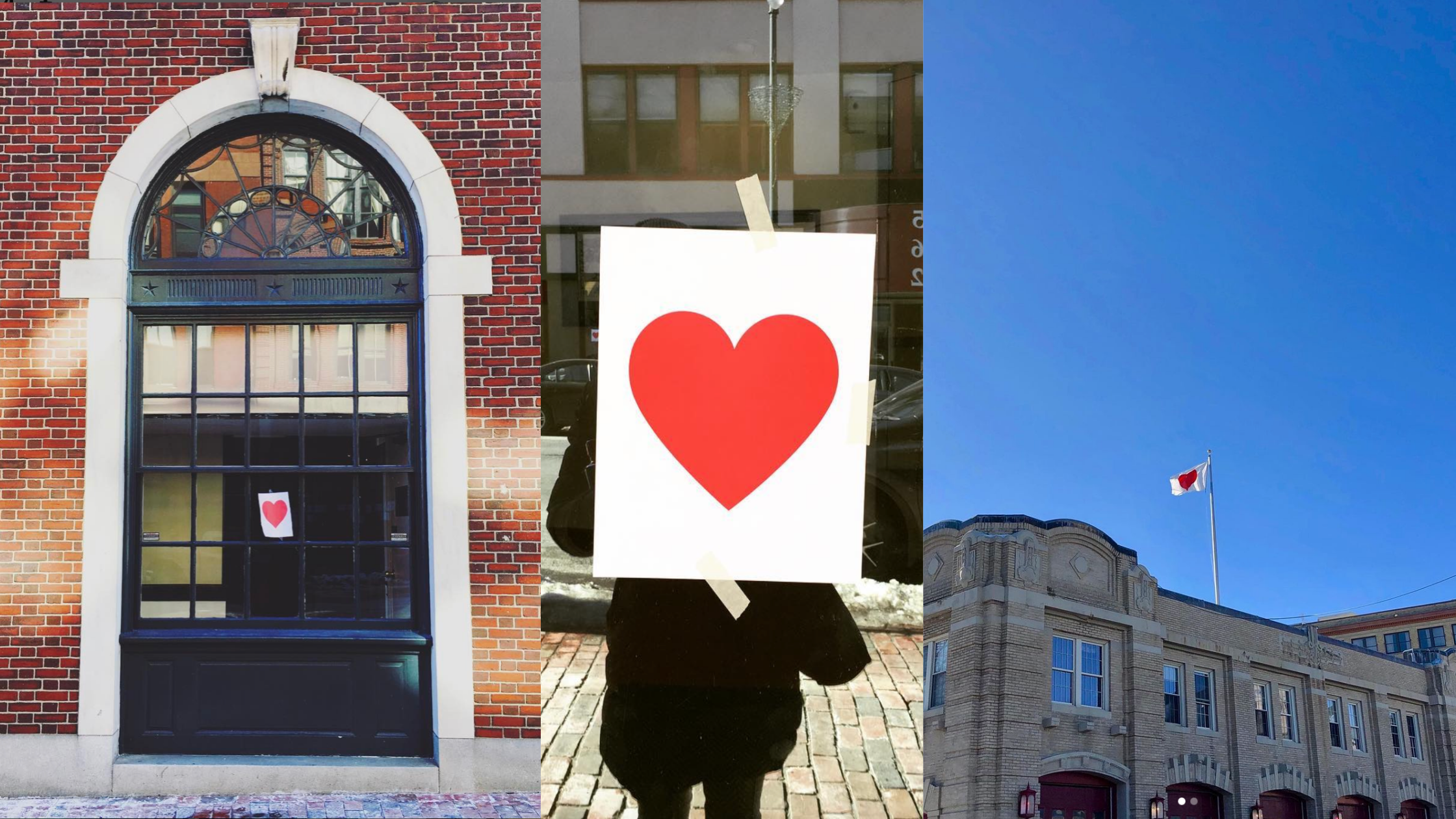 With Valentine’s Day comes flowers and chocolates; dinner dates and snuggles on the couch; love notes from classmates, family, friends, and partners. Here in Portland, ME it’s also the one day our city is revisited by the Valentine’s Day Bandit.

Contrary to the name, the Valentine’s Day Bandit does not rob us of anything–instead they plaster the city’s buildings, landmarks, and any surface deemed worthy with printed sheets of hearts. Some windows have just one and some have many. Others have been graced with banners or flags.

February 14, 1976 marked the first occurence of the Bandit, with the people of Portland left in awe and wondering: who could it be? “One print shop employee remembered a man in his early twenties ordering 1,000 copies of the red heart” (Bryan, 2013). The job order was listed under “Mr. Thought,” with the address belonging to an Ian Valentine. Mr. Valentine denied any involvement. Downtown, around 2am, police stated to have seen a 20-year-old who said “I’m in love and I want everybody to be my Valentine” (Bryan, 2013). Though in both of these cases it could have been the same individual, there is reason to believe the Bandit could be made up of many people.

“Amid speculation that the bandit was rappelling from a helicopter or might even be Spiderman, the hearts continued” (Bryan, 2013).

In 1979, the Bandit hit the Federal Building, Courthouse, City Hall, Holiday Inn, Civic Center, and even a handful of police cruisers. By 1984, they reached new heights (literally) by hanging white banners with red hearts from the Civic Center to the PMA. And in 1986, a seemingly impossible feat was accomplished when the Bandit made a trip to Fort Gorges to hang one large heart for all to see.

A reporter from the Bangor Daily News had the opportunity to follow along on the Valentine’s Day Bandit’s escapades the night before February 14, 2017. The only catch? Protect the bandit’s identity from the public. “Most people are dying to be in the paper. This is the opposite. This is not ego-driven,” the bandit told us. “It’s not about how we do it; it’s why we do it” (Pierce, 2017). The Bandit travels from place to place with an air of knowledge, and years of experience–they are swiftly greeted into locked buildings after hours by workers who support the scattering of hearts.

“It feels as though the whole city colludes in this affectionate display of love and humor (Pierce, 2017). By morning we awaken to a city adorned in red and pink, reminding us to love ourselves, cherish our loved ones, and treasure the place we call hoME.