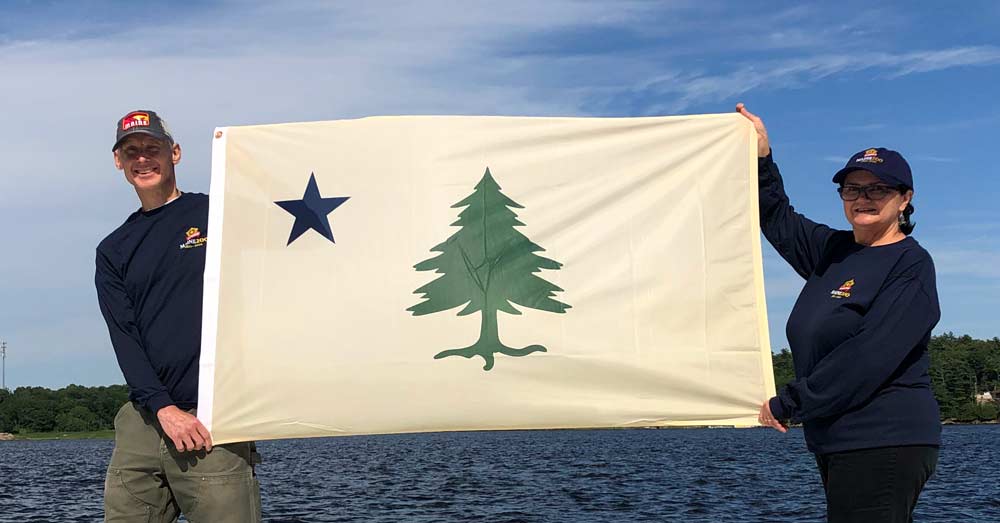 The History of Maine’s First Flag

Maine’s first flag was designed in 1901 and came through the Legislature via marine committees. Seamen wanted a flag that could be recognized at a distance.

The blue star and pine tree fit the bill–with two bold colors against a pale backdrop, and featuring no words, it could be read from either side and easily seen.

According to vexillologists (those who study flags) the original Maine flag checks off the five basic principles of a “good flag.”

Seven years later, in 1909, Legislature replaced it with another flag.

This one features the intricate state seal centered against a blue background. Within the crest, a sailor and farmer stand on either side of a moose lying under a pine tree. Above, the North star shines with Maine’s motto: Dirigo — Latin for “I lead.” A banner stretches below with “Maine” in bold lettering.

111 years later, the 1909 flag is still flying atop the State House dome in Augusta. While containing many symbols of Maine, the current flag is similar to many other state flags within the U.S. Indeed, the Vermont, New Hampshire, New York and Pennsylvania flags also bear intricate seals on indigo fields — and that’s just within the Northeast.

By 1909, many state legislators were Civil War veterans. They wanted a state flag that resembled battle flags from the war. Most Union flags were blue, making them distinguishable from the red Confederate flags. Thus, the blue flag with the intricate state seal was adopted.

With the year 2020 comes the celebration of Maine’s bicentennial; a great time to honor the flag that stood for Maine’s statehood. Sometimes simpler is better.

The two symbols featured on the 1901 flag represent two of the state’s important values.

At the time of the creation of the flag, Maine was the northernmost state in the U.S. The North star represented this, while also representing the importance of direction. This connects to Maine’s Latin motto, “Dirigo.” The Eastern white pine tree set in the center stands for Maine’s agriculture. 89% of Maine is covered in forest, highlighting it’s nickname of “The Pine Tree State.” Pine trees were important to the early economy of the area because of their use in the shipbuilding industry, and are still a valid symbol today.

This design adheres to the original 1901 adoption legislation, but the bill that passed did not set a visual standard for its design. In lieu of the painted and highly detailed pine tree on the original silk version, they have incorporated a more stylized tree they believe is more recognizable from a distance and more easily reproduced.

Hang on a wall or fly outside your home as a symbol of Maine’s history, and a simple statement of Maine pride.