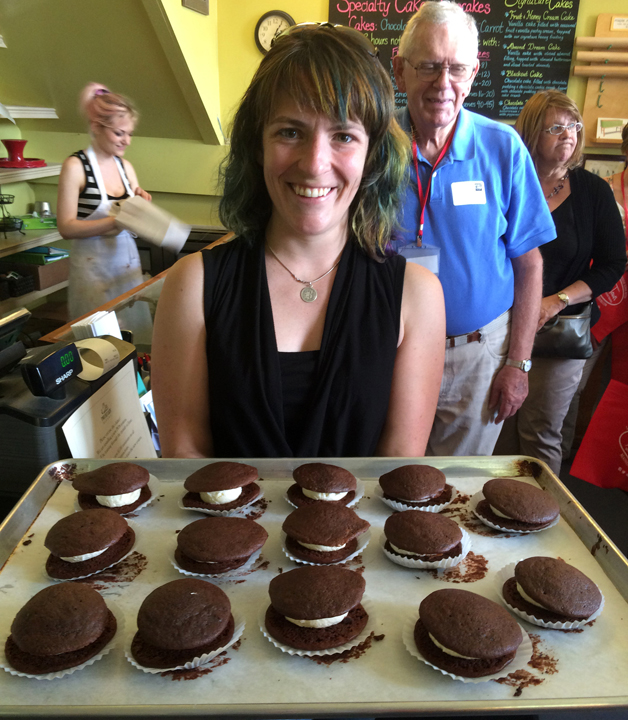 Each year the Convention and Visitors Bureau hosts a day for “Frontline Employees” in the Portland area. These people consist of retail, hospitality, restaurant employees among others. Lots of the different tours that are offered in Portland will offer complimentary tours to these Frontline Employees to help educate them about what Portland has to offer its visitors. There were representatives from Portland Downtown, Rising Tide Brewery, The Children’s Museum and Theatre of Maine, Casco Bay Lines, The Portland Science Center, Downeast Duck Adventures, The Maine Brew Bus, Portland Discovery Land and Sea Tours and Maine Foodie Tours.

Marie and Barb were able to grab two of the last spots on the Maine Foodie Tour while Lisa-Marie and Lindsay were able to snag a ride on the Portland Discovery Trolley. What a beautiful day it was to be walking around and exploring Downtown Portland!

The Maine Foodie Tour began at Two Fat Cats Bakery. They make fresh blueberry pie and whoopie pies daily and Marie and Barb got to taste a freshly baked whoopie pie. If you have never had a whoopie pie before (or even if you have) then you should get to Two Fat Cats ASAP and take your tastebuds on a delectable journey. But get there early in the day, once they sell out they are gone and you’ll have to try again the next day.

After the delicious whoopie pies and to fend off the impending sugar crash the next stop on the tour was Arabica Coffee. The tour was taken into the back of the roasters and shown how the coffee is roasted in small batches. It was educational and the coffee that was given out was so smooth and delicious that Marie didn’t even need to add cream!

After Arabica, the tour was led to the other end of Commercial Street to Veracious, a specialty spice and rub shop. The owners spent years sailing around the world and after deciding to settle on Portland they wanted to open a shop selling all of the different flavors and tastes that they had discovered on their travels. A Lobster Mac N Cheese was made and some salts and seasonings were set out to sample.

The tour ended at Vena’s Fizz House. After a short history of how bitters have been used through time the tour guests were treated to a specialty bitters drink that isn’t even offered on their regular menu. The owner of Vena’s answered people’s questions about the evolution of tonics and the different ways they are used today.

All in all, it was a successful day for the Portland staff. With the amount of questions that are asked regarding what people should do with their time in Portland it’s great to have some first-hand experience about what is available and what suggestions we might have as locals.